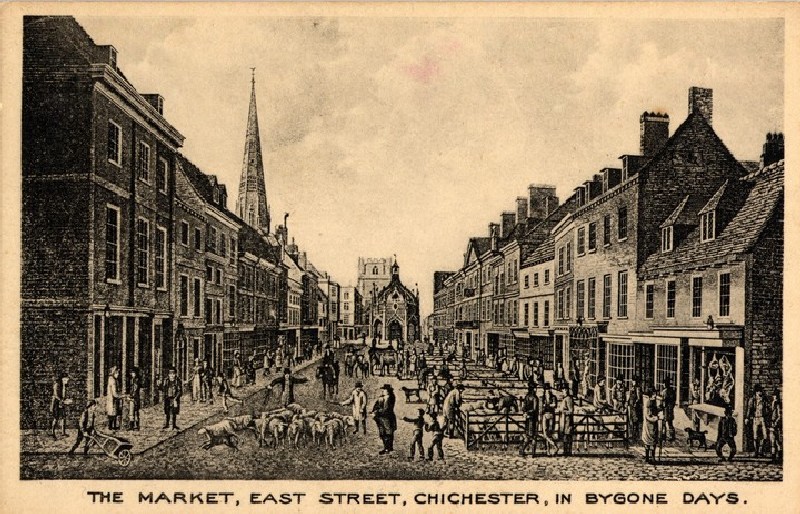 Today is Market Day in Chichester!

In the past Market Day was every other Wednesday and was a very important commercial event for the City. It used to be known as the Beast Market – so named because of all the animals driven into the streets of Chichester early in the morning or even the night before, in readiness for trading. Of course, it was not just animals that were bought and sold. Locals came in to sell their wares too – Cheese, eggs, butter, milk and vegetables….. The butchers set up their shambles under the Council House in North Street or in the area around the ‘Crooked S’, which joins East and North Street. Ironmongers did a roaring trade – mending and selling tools and agricultural machinery. Hardware stores were busy selling oil, candles, paraffin, nails, screws …….

So the City would have been alive with people, animals, smells, noise, money changing hands, boozing in the taverns….. until finally in 1871 the filth and stench got just too much and the weekly market was moved outside the City Walls to where the Cattle Market Car Park is today! The ‘Beast Market’ survived there until 1990 when it became just too difficult to bring large numbers of animals into the heart of Chichester. The area was converted into a car park with part of it still being used as a regular market on Saturdays and Wednesdays. But even this has gone now but the market lives on! It is back in the heart of the streets of Chichester on a Wednesday and on every other Friday we can enjoy getting our fruit and veg for the weekend at the Farmers’ Market.