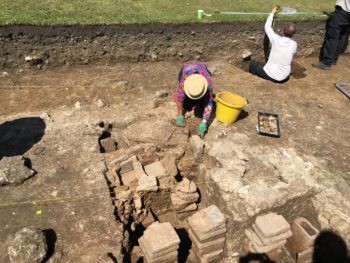 A couple of months ago I wrote about a dig for Roman remains which had taken place in Chichester’s Priory Park. The ground penetrating radar equipment showed that there were two Roman town houses. A full excavation which took place last week demonstrated that at least one of the houses would have been owned by someone of great wealth and importance because attached to it is a private bathhouse.

James Kenny, Chichester District Council’s archaeologist, said, “What’s so remarkable about this discovery is that it has survived over a 1000 years in an occupied city. This is because they are in a park that has never been built on. What we have found is a hot room from a very small private bath suite that would have gone with an extremely well-apppointed, luxurious town house. It would have been part of a series of rooms, including a changing room, a warm room, a hot room, possibly an even hotter room and then into a room with a cold plunge bath.”

He added that the houses probably date to the 3rd or 4th century and would be the equivalent of a property worth millions of pounds today. “Only someone who was incredibly wealthy could have owned a bath house like this and paid for it to be maintained. They would have either made their money out of commerce and trading or were a member of the local aristocracy.”

As much was completed as possible last week and all the evidence gained will be used to bid for funds for future excavations. So for now these two wonderfully preserved houses have been put back to bed under a metre of Priory Park soil!