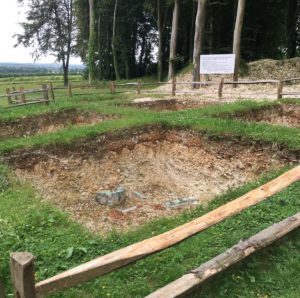 It is so easy to fall into the way of thinking that Chichester is just an ancient city complete with Roman Streets, Norman Cathedral, and Medieval Architecture. Yes of course it is that, but there is so much more! A vibrant collection of 20th and 21st century art and sculpture is around most street corners and tucked away in public buildings, colleges and galleries.

One of the most iconic of galleries located just north of Chichester is the Cass Sculpture Foundation! An open air gallery complete with some of the modern exquisite views of the South Downs countryside. More of that in another post about the Foundation. When I took my annual visit there a couple of weeks ago I was most amused to see what can only be described as a modern interpretation on the Roman Excavations recently discovered under Priory Park in Chichester. Despite it having nothing to do with Chichester, it seems veery apt that it is here!

This work imagines artefacts discovered in an archaeological dig from another space and time, inviting the viewers to create their own narrative.