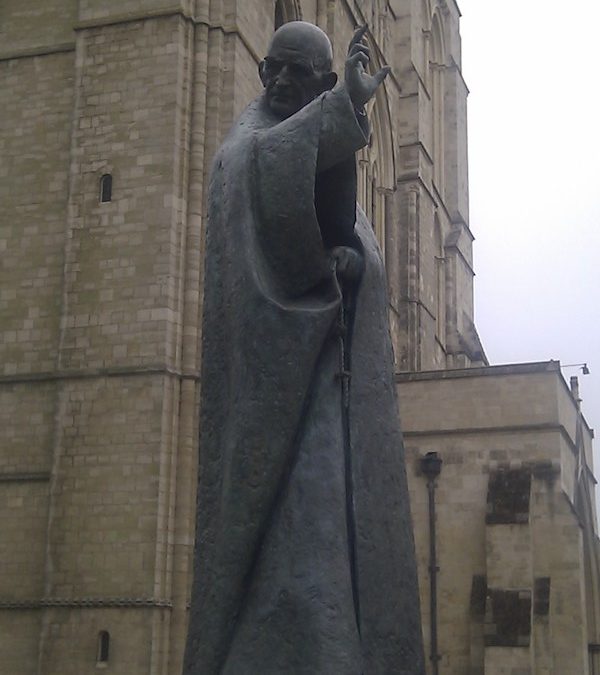 St Richard’s statue watches over us on a Sunday morning when we meet our ’turn-up’ groups for the City Highlights walking tour! This statue was created for the millennium, but St Richard has been a ‘presence’ at the Cathedral for over 600 years.
He was the first Bishop of Chichester, the extremely bright son of a yeoman farmer,  originally from Droitwich in the Midlands.  His entry into the Bishopric at Chichester wasn’t without its problems but during his short time at the Cathedral (1245-1253) he became much loved by the people. On his death his heart was buried in Dover and his body brought back to Chichester.  He was canonized in 1262 and in 1276, in royal presence, his body moved to a shrine behind the altar where it became a place of pilgrimage and prayer for the people of Sussex. In 1538, during the reign of Henry VIII the shrine was plundered and destroyed by the order of Thomas Cromwell.
The statue depicts St Richard holding a scourge, the symbol of self-discipline and the outstretched right arm is extending in a sign of blessing.   It is said that Richard was an ascetic, favouring a hair shirt and refusing to eat off silver.
Philip Jackson, the sculptor, was born in Scotland but now works in Midhurst, West Sussex.  His sculptures are renowned for their ‘flow’, the texture resembles tree bark, rock or lava flow.