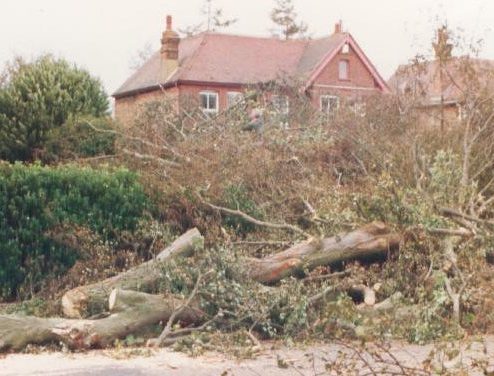 Yesterday’s storm wreaked havoc across the Chichester district and today there’s lots of chat about fallen and uprooted trees, damaged fences and roofs and hanging power cables. But this is really nothing compared with the hurricane of October 1987, which is still talked about more than thirty years after it struck!

Poor Michael Fish, the BBC weatherman, who famously casually dismissed the approaching storm, never lived it down, did he! It turned out to be the worst storm in nearly 300 years with record wind speeds of 115 mph recorded. West Sussex was left without power and all the damage caused left insurance companies facing a billion-pound bill for the repairs and clean-up. Ancient woodlands were totally devastated. In particular, the Goodwood Estate lost thousands of trees and at Goodwood Airfield many of the light aircraft were left lying like upturned beetles.

So maybe Ciara did wreak havoc in Chichester yesterday, but nothing like the one of 1987. That storm doesn’t even need a name to be recorded in our history, it will simply be known forever as the Great Storm!